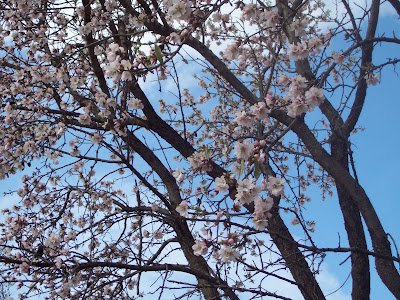 The first food-bearing tree to blossom in the spring is the almond. Its beautiful pink blossoms are showcased against the bright blue Mediterranean sky. Even though the cold winds still blow on the mountains, the almond tree bravely leads the way for the rest of the fruiting trees to begin their march toward spring and summer.
The almond has great significance in the Bible. Aaron's almond-wood rod, which budded overnight in the Tabernacle while the rods of the other leaders lay dormant, was a rich symbol of authority and the vitality of life that is blessed by God. His rod was kept in the ark of the covenant along with a jar of manna to commemorate the choices of God in delegating authority to the levitical line in ancient Israel.
In Jeremiah 1:11-12, the almond is again emphasized, "And the word of the LORD came to me saying, "What do you see, Jeremiah?" And I said, "I see the rod of an almond [shaqed] tree." Then the LORD said to me, "You have seen well, for I am watching [shoqed] over My word to perform it." Does God keep His word, even though centuries and millenia may pass between the time He speaks and the time He fulfills? He certainly does! One hundred years ago, who would have thought that the promise of the rebirth of the nation of Israel was even a remote possibility. Yet Israel was born in a day, just like the Lord promised. (Isaiah 66:8)
When Moses interceded for the newly freed nation of Israel, he reminded God of His promise, "Remember Abraham, Isaac, and Israel, Thy servants to whom Thou didst swear by Thyself and didst say to them, "I will multiply your descendants as the stars of the heavens, and all this land of which I have spoken I will give to your descendants, and they shall inherit it forever." (Exodus 32:13)
When I see the almond trees blossom in spring, I am reminded that the Lord watches over His word to perform it. No matter what is going on in the world, everything is under control. This was all prophesied long ago. Is it any wonder then that it is coming to pass? He will do what He said He will do, and the plans He has for mankind will not waver. When we see the fulfillment of His word, it just confirms the trustworthiness of His character, because God never fails to keep His word. The almond tree lifts up its blossom-laden branches to wave in the March wind, a testimony to His faithfulness.
Aimee Hennen
Posted by AGRARIAN BIBLE at 3:15 AM