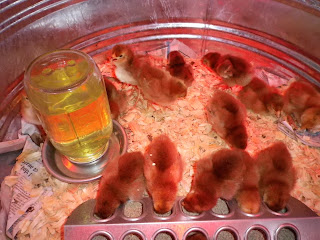 It was my mistake. I was perusing a hatchery web site and decided to place an order for 15 Rhode Island Reds. I clicked on this and that and when the final page came up, I realized that I had not seen a hatch date on any of the pages. The last web page said I would be notified by email of the hatch date. I placed the order, but had this nagging feeling that I should find out when these chicks were coming my way. After all, it was January, and I didn't want to deal with baby chicks until the end of February.
I had been keeping abreast of the blog news, and was well aware of the predictions of food shortages and rising food prices for 2011. I was thinking that it takes chickens a few months to mature before they lay eggs, so I thought that summer would be a good time to start having our own eggs. This thought that I'd better check on that hatch date kept coming to me, so I called the hatchery. This was on a Wednesday. I was told my chicks had hatched that morning and would be at my local post office the very next day, January 17th.
Scramble!!!! A quick trip to the farm supply store for a big washtub to keep them in, a waterer and a chick feeder plus some chick feed. We were all set. You are beginning to think, I am sure, do they have a chicken coop? The answer is no.
We drove to the post office the next morning in a strong snow storm, picked up a bolt in our tire on the way up and down the icy snowy hills from our house. The chicks were there all right, peeping away in their little box. Fortunately, we live in a farming town, so no one thought we were too strange sitting in the waiting room at the tire fixing place with a box of peepers on my lap.
We all arrived home safe and sound and got the chicks settled in their washtub. Then I realized what a predicament I had put my husband in. It was near the end of January and it was cold and windy. There was snow and ice everywhere, not a clear patch of ground to be found. We don't have a barn yet, just this little cabin. Michael looked at me and said, "Where and how am I supposed to build a chicken house?" Gulp.
The blizzard of 2011 on February 1st and 2nd along with several other snowy and windy events, slowed down his progress. Days and days out in the freezing cold till his hands were perpetually numb, and I was beginning to get the picture that I am far too impetuous. Yes, we needed chickens. No, we did not need to get them in the middle of winter. Believe me, I have apologized to him and to God many times.
All that to say, the chicken house is finished today. It is a balmy 64 degrees, the January thaw having come in February. It is none too soon, since the chickens are completely filling up the washtub by now. We are all looking forward to their new quarters, and some peace and quiet at night. Except for the coyotes howling at the gibbous moon.
Posted by AGRARIAN BIBLE at 2:42 PM